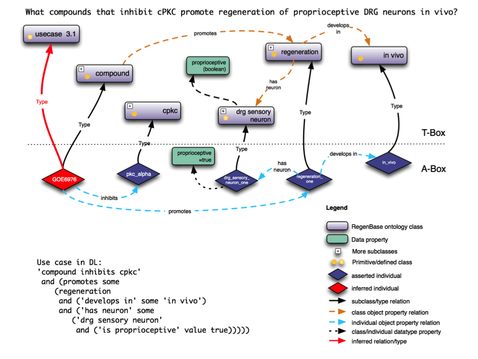 RegenBase is an effort to develop an information framework and knowledge base to facilitate research about nervous system regeneration.  It will have several components including an ontology that is linked to other ontologies and a knowledge base built with a triple store and a relational database.

RegenBase will seamlessly integrate diverse data that are produced by neuroscientists and cell biologists studying nervous system injury, with other resources, such as the Neuroscience Information Framework and the BioAssay Ontology. The RegenBase system will allow bench scientists to link metadata and results from studies on nervous system injury and disease to data and knowledge from other domains with an emphasis on molecular targets and the small molecules that perturb their function to speed the development of novel therapeutics.

The regenbase ontology is now live at the NCBO Bioportal