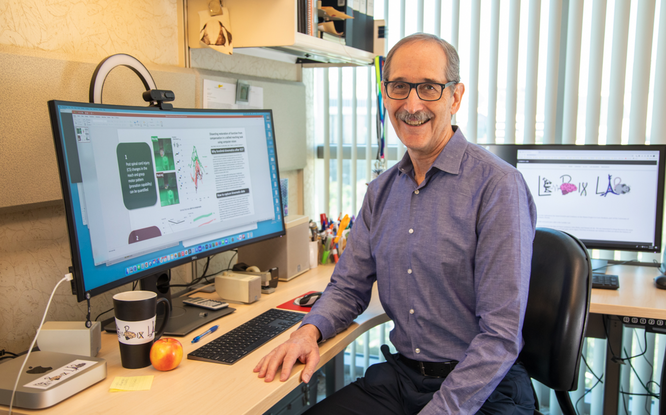 Our lab is focused on understanding how axons grow long distances to their targets. This is an immensely complex problem and it is clear that any single molecular signal can not mediate this. For many years we studied the Ig superfamily adhesion molecule L1. It was one of the first cell adhesion molecules discovered in the nervous system and the first shown to stimulate axon growth. Mutations in the L1 gene cause an X-linked, recessive inherited disease in humans with devastating consequences. Knocking-out the L1 gene in mice causes similar abnormalities in the mouse CNS. For a number of years we focused on the L1 cytoplasmic domain and how it is involved in signaling and trafficking to better understand how L1 influences axon extension and guidance. But times have changed and now our group focuses on axon regeneration using high content screening of compounds and genes, next generation sequencing and informatics.

I went to Revelle College at UCSD, earning my B.A. in Biology in 1973. While there I became interested in neuroscience while taking courses from Anthony Deutsch, Dan Hartline, and Robert Livingston. Somehow I managed to get into graduate school despite spending way too many hours at the beach, surfing and scuba diving. I received my Ph.D. in Anatomy from Emory Univ. in Atlanta in 1978. My dissertation involved electrophysiological, behavioral and anatomical studies in rats with constant light induced retinal degeneration. This began a long fascination with the visual system, a system I continue to use when ever I can exploit it.

I moved to Washington University in St. Louis for my post-doc. This was an amazing time to be at Wash U. The neuroscience community was lead by Max Cowan and included people like Victor Hamburger, Dale Purves, Nigel Daw, Robert Miller, Ed Jones, and Tom Thach, among many others. The infamous Saturday morning seminar program with required attendance for all post-docs and students brought a constant stream national and international leaders of neuroscience to the campus. I started out in Alan Pearlman's lab studying the visual cortex of reeler mice. This project moved very quickly and lead Alan and me to the conclusion that studies on neural cell migration using cell biological techniques were the next important step. Fortunately for us, David Gottlieb was beginning to make monoclonal antibodies to the nervous system so I joined a project making antibodies to chick retina and studied the first monoclonal antibody to the neural cell adhesion molecule (NCAM), quite by accident.

Ray Lund gave me my first faculty position in 1981 in the Anatomy Dept. at the Medical Univ. of South Carolina. While there I made an antibody to NgCAM, the chick homologue of L1. After only two years, I moved with Ray to the Anatomy Dept. at the Univ. of Pittsburgh. Shortly there after Carl Lagenaur joined the dept. and we initiated studies that lead to the demonstration the L1 stimulates axon growth, the first adhesion molecule from brain shown to have this property. We also showed that it does this via a homophilic binding mechanism.

In 1988 I moved to the newly created Neurosciences Dept. at CWRU that was run by Story Landis. With Sue Burden-Gulley and Ross Payne, I began a series of studies on how CAMs influenced growth cone shapes, cytoskeleton and dynamic behavior. One of the most interesting findings was the lack of correlation between adhesive strength and axon behavior. While this is an accepted idea now it was unpopular in some quarters at that time. This result lead us (Eric Wong, Andy Schaefer, Hiroyuki Kamiguchi and Kristin Long) to focus on the L1 cytoplasmic domain in signaling and trafficking. Around 1988 we (Lulu Hlavin and myself) also started a project to clone the human L1 cDNA so we could do structure/function studies. To our surprise and delight, two groups of human geneticists used our cDNA clones to show that mutations in the L1 gene cause a terrible genetic disease, X-linked hydrocephalus. Subsequent studies by Mami Yamasaki and myself revealed a strong correlation between the type of mutation and the severity of the disease. It also confirmed the notion that the L1 cytoplasmic domain plays an essential role in axon growth and guidance. While at CWRU I was very lucky to work with Gary Landreth and Urs Rutishauser.

In 2003 I accepted a position at the Miami Project to Cure Paralysis at the Univ. of Miami. This center has taken the philosophy that by promoting interactions between basic and clinical scientists, it will be possible to speed the finding of a cure for a devastating clinical problem. The "Miami Project" has an amazing mix of scientists spanning the range from molecular biology of growth factors to kinesiology of paraplegics. Even more impressive is the passion of the benefactors of the Miami Project. Individuals and families from all walks of life and around the country work to support the research here. Meeting them helps scientists, students and staff really understand the importance of what we are trying to accomplish.

My lab is merged with John Bixby and Hassan Ali.  Hassan Al-Ali has been a part of our group for 12 years.   We collaborate with many people around U.M. but especially Ubbo Visser, Zheng Wang, Stefan Wuchty, Stephan Schürer, Pantelis Tsoulfas, Jae Lee, and Kevin Park.

After working on CAMs for years we have redirected all of our labs efforts to searching for genes and compounds that can enhance axon regeneration in the CNS. Look at the Research area to learn more about HCS and our various projects, including informatics and minimal information reporting standards.

While riding the train between Basel and Zurich, when I was on sabbatical in 1997-8, I wrote a story about the epigenetics of fashion and how that plays out for scientists (spoiler alert:  it is not a pretty picture).